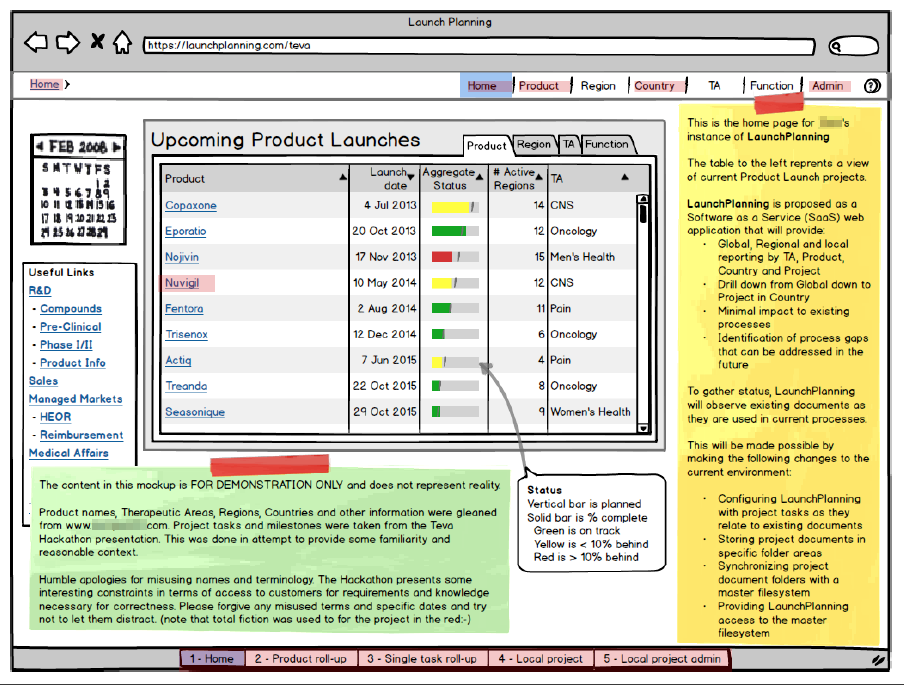 I learned about the Enterprise Hackathon at Philly ETE. I was an independent consultant at the time, so it seemed like a good opportunity.

I chose Teva’s challenge to develop a system to provide a global view of their product market launches (overlapping launches of drugs in 30+ countApp Designries). Despite working for 7 pharmas over 15+ years, I didn’t know much about product launches.

Those of us whose abstracts were accepted got to meet with the Global SVP of Commercial a couple times for Q/A. And, we got a 12 slide deck that provided some background. Aside from that, we didn’t have much to go on. We did convince Teva that a working system in 2 1/2 weeks wasn’t likely. So, they agreed that a proposal and a prototype would suffice.

I wrote out my design and provided a business plan, high level project plan, 8 screen prototype, db schema, high-level system architecture. I proposed a solution and a plan to build it.

The field was narrowed down to two. I wasn’t able to present in person because I had some crazy stuff going on. So, I walking them through my proposal by video conference. After presenting, I joined my family at the dinner table with the phone on speaker waiting for the deliberations to finish. When they announced that I won we all silently shouted.

Unfortunately, Teva went dark a month after the Hackathon. I’m still waiting to build out launchplanning.com.